Fourteen adventurous days have passed and our teams had the time of a life. Princely tells us one last time about the exciting events of the Rickshaw Challenge Mumbai Xpress 2017!

Only a couple of days before the Mumbai Xpress 2017 comes to the finish. The longest rally in our calendar never fails to excite the participants more than all the other rallies. It’s 14 days through 4 states and it goes from the west to the east coast. The day in Bangalore started overcast. The judging of the makeover challenge kept the competitive spirits of the participants high. First we had the school visit, where also the judging was to take place. The convoy to the school was blocked by the Bangalore police for a brief time. They wanted to check the Chennai Garage Service Van papers before they allowed us to continue. The teams were taking pictures and the ongoing heavy traffic was just crazy and the local people were all with their cameras. This had beaten the publicity in the previous day’s newspapers. 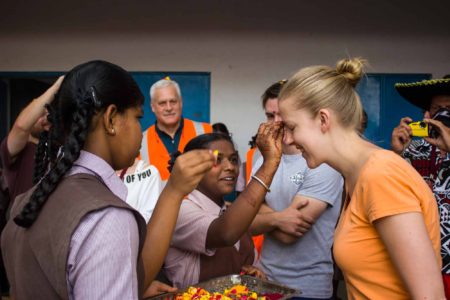 Finally after a big huff and puff we reached the school. The Round table school in Bangalore gave the teams a traditional welcome and the school band performed the national anthem of India. Then the school assembly dispersed and the teams visited the school classes and had a good time. Three upper grade class girls were volunteered to judge the makeover. The obvious choice was Team 3 Just in time. After this, it was a rather uneventful day. The highway driving was like a cruise, as all the teams had seen the tougher terrain of mountain roads.

The guests of honor in the front row 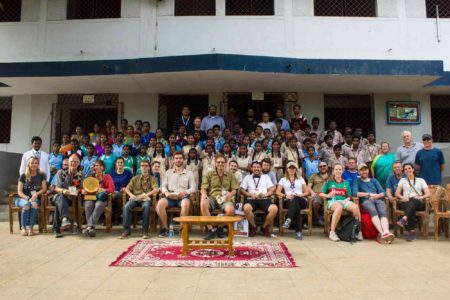 I had no calls in-between for service and all of the teams made it to the hotel around 4.30 pm.  Team 12 The Rickshaw Lady and Team 14 Spider Flamingos, skipped the school and drove straight to the hotel and they reached the hotel at 12.30 am.
I stopped in Ambur for the Briyani and I saw a couple of teams there. As the state has ruled that there are no bars allowed within 500 mt of the highway, the base hotel lost its bar license. But that is not the end for party, the innovative teams went and bought a quantity of beers for the night. The teams had a great time. Team 3 Just in Time went to a local circus to witness what an Indian circus looks like. We’ll continue with the stories of the final day and till then its bye. 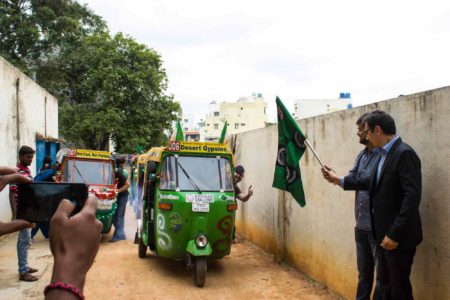 All that begins well will end well. Living up to those legendary words, the Mumbai Xpress 2017 has come to the final day. The overcast morning in Vellore  was not a dampener.  After a quite long briefing, being the last day, the Round Table India members arrived at the hotel around 8.30 am.  Then it’s convoying to the project visit. The place was an automobile accessory unit supported by Round table. They employ disabled and destitute women. Due to an economic meltdown, the unit was on casual leave. It was just the project, without the workers there. A naughty trick was played on the parking place of the project visit. Secretly some teams took the spark plug of all the rickshaws parked there. When the others came out from the project and wanted to continue all got starting issues, except Team 4 9 Inch Males, Team 6 Desert Gypsies and Team 7 Not Fast, Not Furious.  Now you probably understand who did it…

With this fun note the day started and I had no calls, thanks to the Chennai Garage team, to make it a minimum break down Mumbai Xpress so far. The schedule was perfectly maintained and the schools finish was perfect for the beautiful rally.  It’s award time there and Team 3 Just in Time was judged the Champions. Charity went to Team 5 Oh Yeahh!, Bonkers went to Team 7 Not Fast, Not Furious. The award evening was organized by the Round Table and I made Sandeep the chief guest and the activity challenge of the day of buying a silk towel to Chief Guest was given to him. The final drive to the hotel was braved by the teams by their own and it was smooth in spite of heavy traffic in Chennai.

Congrats to the winners of the Mumbai Xpress 2017! 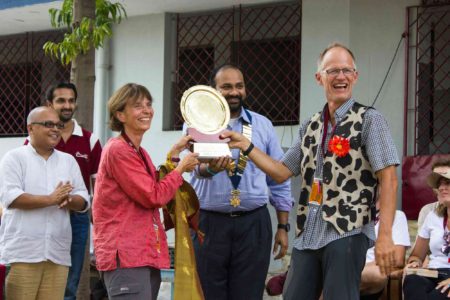 Then we moved on to the last segment of the event, the party. The Elements Hostel terrace ‘Muthu mess’ has hosted several memorable parties and it lived up to its name. I just thanked the Chennai Garage staff and gave them mementos distributed by the teams. A surprise element to end the note was a romantic proposal of Team 13 Daft Trunk Garage. Rito, one of the friendliest persons on the trip, proposed to his partner in Rickshaw Challenge, Gudi. The words are still in my years, “If we could survive this challenge, we probably survive the life challenge and would you be my love?” As the team name is inspired by the Daft Punks band and their, theme song is “Getting Lucky”. 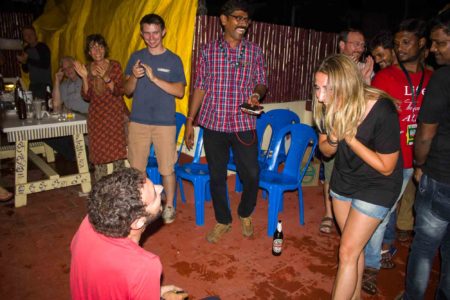 With such a lovely note I would like to wind up the whole rally with a great wave. Thank you guys for following this and kindly go and press your register button on Rickshaw Challenge page.