It’s been adventurous two weeks during our rickshaw adventure, but we are quickly approaching the last days of the Rickshaw Challenge Mumbai Xpress 2017. But first, here is one more of our Princely’s great updates!

“Do something stupid and take a picture of it I”

The first school visit in the rally was planned for the day. The Manglore day was a bright start. Being a long distance, teams were well informed and we did an early briefing at 7.45 am. Team 12 Rickshaw Lady and Team 14 Spider Flamingo wanted to start early and they skipped the school visit. The other teams assembled for the school and we arrived there on time. The day is the Independence Day for India, so the school had planned for flag hoisting. The Round table India’s Manglore chapter arranged the event for us. After assembling in the school, the teams were introduced to the project by the Round Tablers. Then we moved on to hoisting the flag and the ceremony was witnessed by the teams. By 9 am all got over and 10 to 15 minutes were taken for Photo session. After photo session all the teams were on the way.

“Do something stupid and take a picture of it II” 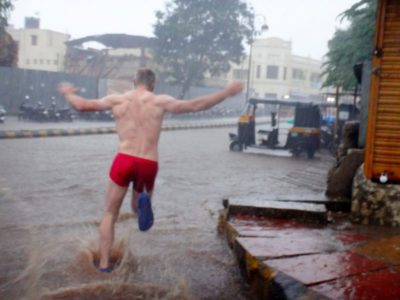 By routine I had my breakfast and kept moving towards the next destination.  Team 4 9 Inch Males gave the first service call for the day, after two hours of drive. The service team attended them and found out that they had burnt the piston of the engine. It was fixed in 30 minutes and the team could get back on road. When I had lunch in Medikeri, I met Team 1 Axles of Ignorance and team 11 at the lunch place. After that, there was absolutely no call for the day.

“Do something stupid and take a picture of it III” 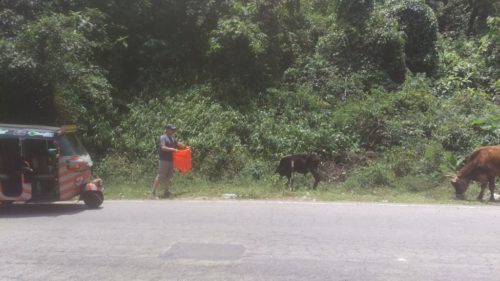 The final approach to Mysore had pouring rain and the teams had to drive slowly because of the visibility. Finally all the teams arrived at the hotel before 7 pm, except Team 12 The Rickshaw Lady and Team 14 Spider Flamingo. There were plenty of fun moments on the road and as usual Team 1 Axles of Ignorance had their part this day as well. Their handle bar was painted gold when they had parked it in the hotel for lunch.

Extra points for spotting an elephant 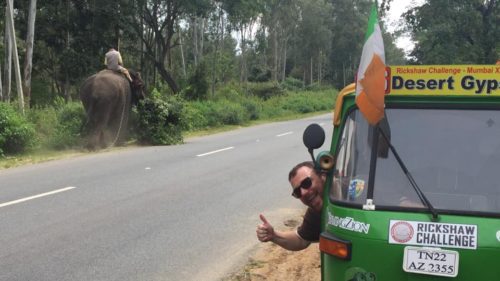 Team 6  Desert Gypsies had a lucky moment when they crossed an elephant and all the other teams were jealous of that.
Team 12 The Rickshaw Lady and Team 14 Spider Flamingo went the wrong way and entered another state called Kerala. Eventually they made it to the hotel around 8pm. The day witnessed many locals wanting photos with the teams as they were all high on Independence Day Celebration. The Rickshaw Challenge never had any dull movements and it lived up to the participant’s expectation. 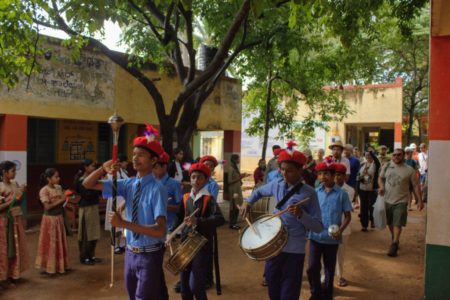 Another school visit in Mysore was on the agenda for the day. A Round Table member from Mysore joined us in the hotel lobby, 15 minutes before the start of our briefing. After a quick briefing we started in convoy to the school at around 8.15 am. There was a band to welcome the participants in the school. The school arranged a dance and we had some interaction time with the kids. Teams introduced themselves to the kids and spoke a few words on how they feel about India. After a request from the kids, participants sang and even danced for a song. It was a warm and happy interaction and all teams enjoyed the visit. 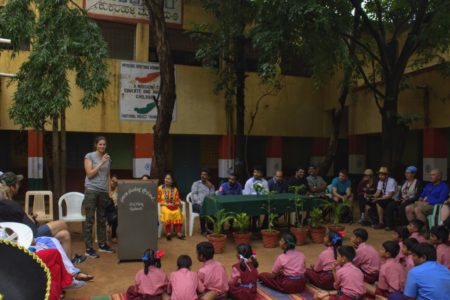 It is an easy day drive as the distance is less than 150 km. There was absolutely no service call for the day and the Bangalore traffic was the only challenge for all the teams. Some of the teams stayed in Mysore for the morning session as they visited the palace. All the teams arrived at the hotel before the flag off time, except 3 teams. Team 11 Sgt Pepper’s Submarine, Team 12  The Rickshaw Lady and Team 14 Spider Flamingo stuck together from the beginning of the day and they reached the hotel at 8.15 pm. 10 km for 1 hour was the only information they could pass on after they reached the base hotel. 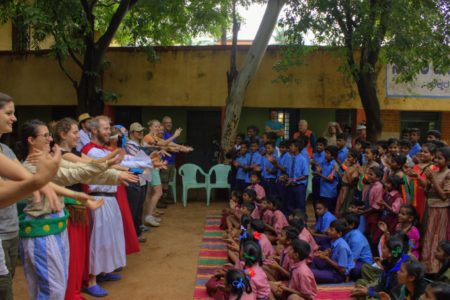 The day came to end with Banglore Red FM taking interviews with the participants. All ended well and preparation for the makeover challenge has been finished by some teams. As there was some sudden pour of rain, some of the teams wanted some time in the morning before they start. With a long distance to go, teams are prepared to face it. See you tomorrow, until then bye.

We have a new leader with Team 13 Daft Trunk Garage, but they are very closely followed by Team 1 Axles of Ignorance and Team 5 Oh Yeaahh. There are still some days to drive and some challenges to do, so nothing is decided yet!