Princely never gets tired of telling us all about what’s happening during the Rickshaw Challenge Mumbai Xpress, our amazing rickshaw adventure from Mumbai to Chennai. Check out here what happened last!

It was raining when we started the day in Goa. By 8.15 am we had our briefing for the day. Crossing border has been highlighted and there were several questions about alcohol in the bags – not always a legal thing in India. Finally all was answered and the teams were ready to go. Team 9 croissant Baguette had an issue with the police when they travelled towards Goa. The police man checked all the documents and he said there were still some papers missing. Finally they found out that the paper he is asking for is a currency paper. Rs.500 had finally set them free. 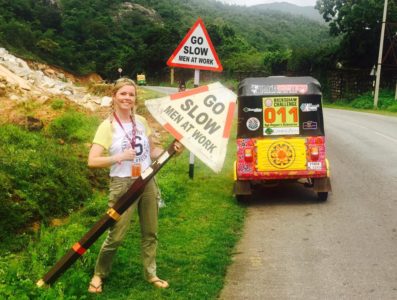 On the rest day sadly Team 10 Swole Team 6 announced me that they are quitting the challenge to get back to Thailand to be with their missing friend. So on the morning everyone gave them a hug to see them off.  Team 11 Sgt. Pepper’s Submarine, had Halla Mixa, who was driving all alone so far and she had developed a stress pain in her left hand through handling the clutch. So in the morning Team 2 3 Amigos, which has three members, agreed to help her by swapping Craig from their team.
The day was eventful, as I had three service calls. First one came right after we crossed Margoa around 10 am. Team 14 had their Silencer cut off and they were 20 km away from service team. It was attended and before they could start I already got a new call from Team 4 9 Inch Males. They also had the same issue and they stopped after crossing the border. It was around 12 am when the team was cleared and back on road. Final call was from 13 and they got themselves fixed with local help before the service team could get them. 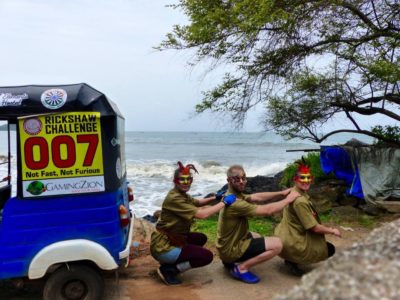 I visited the detour place Gokarna to see whether any teams had been there as suggested in the Day sheet. I could not see any teams there. Finally when I arrived at the base hotel almost 7 teams made it to the hotel. The final team to arrive was Team 12 The Rickshaw Lady at 6.45 pm. Of course all the teams started to go to the place where beers were served and it was a quiet ending in the small town of Murudeshwara. Looking forwarded to another day!

Murudeshwara start was a bright one and to cross the parking lot of the temple was the only challenge in the morning. Teams were briefed early and all started early. After sending all the teams I had breakfast with the Chennai Garage team and moved towards Batkal. The first call was from Team 7 and there was a carburetor block problem for them. It was sorted out quickly and I moved from there.
In an hour I had another call from Team 13 and the mechanic team could reach them in an hour. The issue was also a carburetor block due to excess oil. Rest of the day was event free and being a sort day all the teams reached the base hotel in Mangalore well on time.

They day’s challenge in Udupi had some funny movements. As it is Krishna Jayanthi day in Udupi, the crowd was out of proportion and there was long queue to the temple. So the teams were looking at it from outside and left. Team 1 Axel of Ignorance was also there and suddenly they found the vehicle missing. But that was an act by some of the mischievous teams to hide it from them. Finally all had good laugh at it over the drinks in the evening.
More fun and more stories will continue, until then bye!

For the competitive ones, here is the latest ranking of the Rickshaw Challenge Mumbai Xpress 2017!  Team 12 The Rickshaw Lady took over the first place, closely followed by Team one Axles if Ignorance and Team 5 Oh Yeah. But nothing is decided yet, everything can happen during the Mumbai Xpress!