Visit Pondicherry for a fasincinating fusion of Indian and French culture.
There are many reasons to visit Pondicherry (now officially known as Puducherry, but normally referred to as Pondi), the former French colony surrounded by Tamil Nadu on India’s South-Western coast. It has European-influenced cuisine and bohemian vibe combined with a spiritual side that is very much Indian. Here are the top reasons you should visit Pondicherry!

If you’re escaping the rush of India’s cities, there’s not much better than relaxing on a Pondicherry beach. There are plenty to choose from: Promenade beach in the centre of town, though that’s not the best for sunbathing. There’s also Serenity Beach, Auroville Beach, and you can take a ferry up the coast to Paradise Beach. Many people surf around this area, but if you’re feeling less active, sit back and enjoy the beautiful sunsets over the Bay of Bengal. They are at their most spectacular from November to January.

For those who visit Pondicherry, the promenade is a must-see. Also known as Goubert Avenue or simply Beach Road, it stretches over 1km, parallel to the Bay of Bengal. Have a stroll, or even a jog, and admire the French colonial architecture. There’s a World War One memorial plus statues of Joan of Arc and the former governor of French India Marque the Dupleix but, as if you remind you that you really are in India, there’s also one of Mahatma Gandhi. There are stalls for you to grab a coffee or an ice cream as you gaze towards a still-standing 19th Century lighthouse. This is where the town’s reputation as the Indian Côte d’Azur and the Riviera of the East feels most appropriate.

The cuisine of Pondicherry is blessed by its combination of three factors: Tamil cooking style, French influence, and excellent seafood. As pictured above, even their pizzas (pictured above) have a French twist. Make sure you try some fruits de mer, freshly caught by local fisherman.The predominant cuisine is Tamil, so sambhar and rice are everywhere; however, it certainly isn’t too hard to find a baguette or a croissant. As ever, the local favorites are worth trying, but you should also head to a French restaurant for more gourmet style dining. At the very least, sip coffee at one of the French-style cafes. If you want something stronger, you’re in luck, as being Union territory rather than Tamil Nadu proper, beer (and wine) prices are considerably cheaper than elsewhere!


The French and Tamil Quarters 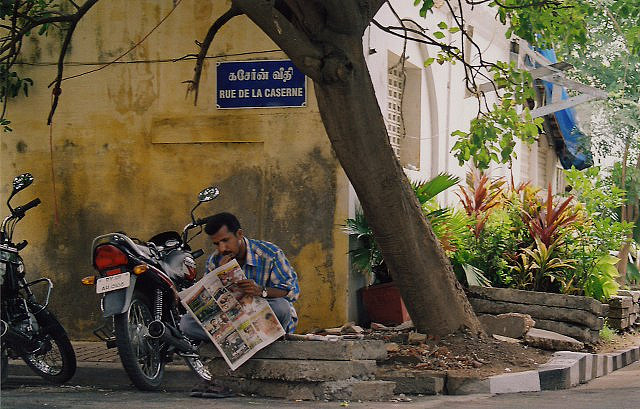 One of the greatest joys of Pondichery is to explore the French quarter, formerly known as “White Town”, with its French street names and colonial architecture. Like a proper European city it’s laid out in a grid system. It even has a Notre Dame (des Anges) which offers mass in French, Tamil, and English. Many locals still speak French, and the unusual laid-back attitude here attracts many bohemian types away from the high-paced cities. The Tamil Quarter, previously called “Black Town”, is an interesting comparison though it too retains French influence. However, the difference is clear to see: the streets are narrower and more disordered, the area dotted with temples and the occasional grand colonial mansion.

In addition to Notre Dame des Anges, Europeans left behind several other cathedrals, some rather impressive. Our Lady of the Immaculate Conception (pictured above), completed in 1791, is completed in a Portuguese style similar to churches seen in Goa. Meanwhile,  the Sacred Heart Basilica, dating from the beginning of the 20th Century, its impressive red and white facade representing Indian neo-Gothic. In total, there are over 30 churches in Pondicherry. You should also be sure to visit Manakula Vinayagar Temple, which has been around since before the French even arrived in Pondicherry. It’s a site of pilgrimage: if you’re lucky, you can get blessed by the resident elephant!

For many, Auroville is reason enough to visit Pondicherry, though it’s 15km from the centre. This spiritual township complex was founded in 1968 by a French-born woman known as “the mother”. It’s an attempt at utopian living, where all nationalities could live together in harmony, living sustainably. Built to house 50,000, nowhere near that number live there today; however, it’s an intriguing place and the golden dome (above) is worth a look! It was founded upon the ideals of the philosopher Sri Aurobindo, whose ashram — which also attracts many spiritual pilgrims — is in the center of Pondicherry.


Visit Pondicherry with a Rickshaw Challenge!

If you like the sound of Pondicherry (and rickshaws!) then come along for a rickshaw challenge adventure rally! The Tamilnadu run leaves in two days time, with participants racing for a week including a night’s stop in Pondicherry. If that’s too soon, consider the Classic Run, beginning December 28th from Chennai. Over ten days the auto tuk tuk race will make its way South to Trivandrum, and there’ll be a chance to explore Pondi on the way. It’s a wacky way to explore the South of India, and you’re guaranteed to have a laugh, as well as a great adventure. 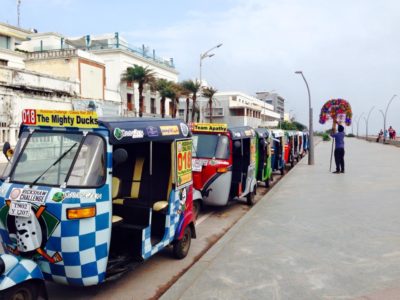