The Tamilnadu Run, a seven-day tuk tuk adventure rally through Southern India, has begun. The first weekend was dedicated to preparing the teams for the fun ahead. Here’s organiser Princely’s blog about what happened on Day 1 and Day 2 of the Tamilnadu Run Rickshaw Challenge 2016! 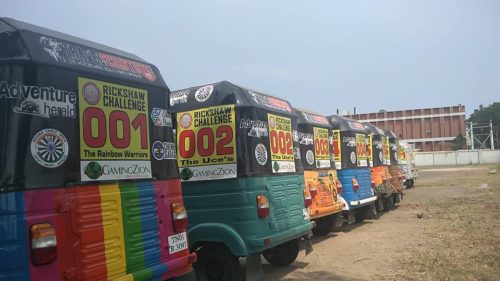 It was around 8.30 am when I reached the base hotel in Chennai, which to my surprise had been renamed from Deccan Plaza to Hotel Regency Plaza. I wondered what this could mean for the participants from all round the world who were informed of the hotel name one month before the start of this event. A local taxi tuk tuk (a tuksi) driver recognized me and asked me “when are the auto’s coming?” There’s always such frenzy that these rallies have registered in local minds.
We opened the kit and spread it across for distribution. The first team to register was Team 10, from Switzerland, the “Contemporary Nomads”.  Johan and Christel are couple from the chocolate country, who were excited and the same time had no clue what to expect. As we discussed the madness of the rallies, they were pretty amused about the event and revealed they had been looking forward to the it from the moment they had paid. The tool kit, the medical kit and the other accessories took them by surprise.

Slowly, one-by-one, the teams started registering and checking in to the hotel.  Team 5 (Let’s Go Jozi) arrived at the hotel at 11 am, which was exactly when we had scheduled our briefing. And there was still no news from Team 11. All the remaining teams had their ear to the ground for the all-important briefing. After the briefing, the organizing team and I prepared to leave for the practice. That was the time Team 11 landed at the hotel reception for the check-in. I quickly went through the plans for them and asked them to join us at Practice. It was 100% roll call for the practice. All teams were pretty excited to look at their rickshaws for the first time and they were spell bound.  It took a while for them to come to reality and start the practice. The practice started at 2pm and went on till 4pm. 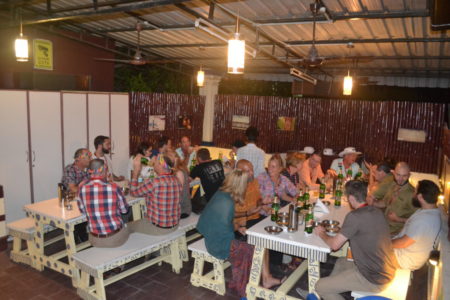 Relaxing at Elements Hostel
We wrapped up the day session and teams started their first day drive to the Hotel. It was an pretty smooth day as almost all the teams made it in to the hotel before I got back. Team 2 experienced a small snare in their drive back and was eventually attended by some locals, but still made it to the hotel. Then it was time for the welcome party at the Elements hostel roof top, the perfect place to relax! Beers stories and getting to know each other followed. All of them had great time and Team 11 (Shannan) endured a whole night of pub hopping and fun.

The second day began with a small drive to Elliots beach for the activity challenge. After the first day, all I can say is that this was pretty much a cake walk.  First thing in the morning I spent attending a fault for Team 2, as they had burnt the clutch on practice. After finishing the activity all the teams went for shopping and some of them made planned their night out together using the shared Facebook group page. All the teams are confident to take the road tomorrow and we bid them bye after wishing all of them “all the best” for the travel as they continue with the Tamilnadu Run. 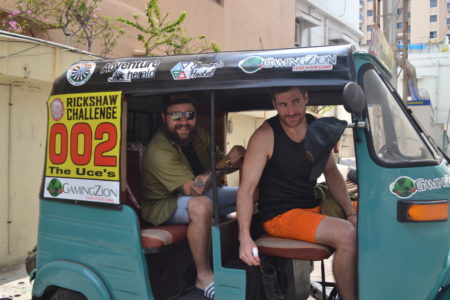 A little bit more about some of the teams. Two sets of experienced travelers, couples from South Africa, named their teams after two popular cricket stars AB De Villiers (Team 8) and Jonty (Team 9). The rest are all pretty young teams and there is an all-girl team, 2 broke girls, with such an amazing story backstory.
The 2 broke Girls, Joanna (Irish) and Lindsay (USA), are fellow travelers who met in Bali (Indonesia) this April and decided to join this madness. They had pretty much known each other for 6 days… they must have gelled very well. They are great sports,  down to earth and practical.