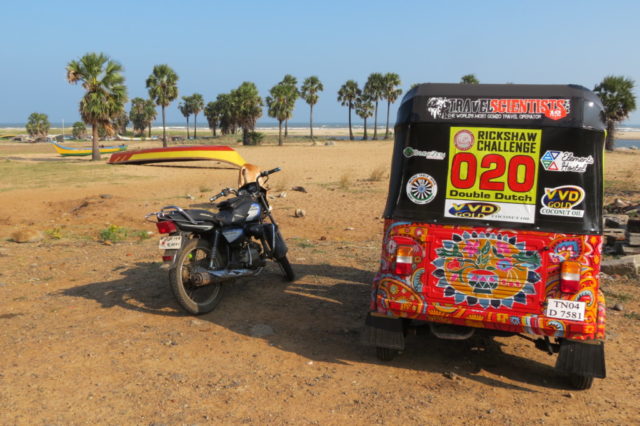 It’s almost time for the Classic Run Rickshaw Challenge, with this year’s event set to start on December 28th in Chennai, making it the perfect way to spend the New Year. On the teams’ 950km rickshaw odyssey, they’ll see an incredible range of cities, brimming with life, beauty, and culture. Here are the cities teams will visit.

Chennai, formerly known as Madras, is Tamilnadu’s capital and by far the largest city in the state. One of India’s major cities, it’s a perfect first stop when visiting India. Not quite as crazy as the very largest cities, and a little less “showy”, there’s still lots to do. You have to have a stroll along Marina beach (pictured above), the longest natural urban beach in India, and see nearby Fort St George, a relic of the city’s colonised past.

The second stop on the Classic Run provides a chance to experience a very different atmosphere. Pondicherry (now officially known as Puducherry), is technically not part of Tamilnadu: instead it is located on Union territory, ruled by central government. In fact, Pondichery was French territory until the mid 20th century, and when it comes to cuisine, architecture, and overall feeling of the place, their colonial legacy is still very apparent today.

The third city we visit is Thanjavur, the religious and cultural heart of Tamilnadu. One of India’s oldest cities, you can see relics of ancient empire, alongside impressive modern temples. Of particular note is Brihadeeswara Temple, a treasure of Indian architecture, over a thousand years old. The city is filled with life, famous for painting, music, and dance.

Madurai is a city of temples, and it is impossible not to be impressed by the many intricately designed gopurams which tower over historic sites. An ancient city, which once traded with Rome and Greece, it has long been an important center for Tamil culture. However, the city is also flourishing in modern times, and it bustles with energy, especially during festival season.

The Pearl City, Tuticorin, is Tamilnadu’s gateway to the sea. Also known as Thoothukudi, it has been an important port for centuries: once ruled by the Pandyan kingdom, it was taken over by the Portuguese, Dutch, and then British. Make sure you try the speciality of the city: the famous Macaroon!

Tirunelveli, variously known as Nellai or, historically, Tinnevelly, is located on the banks of the river Thamiraparani. Once the capital of the Pandya kingdom, there has been a settlement here for over two thousand years. The city’s most famous site is the impressive Nellaiappar Temple, dedicated to the god Shiva.

It’s easy to find Kanyakumari on a map: it’s located at India’s southern tip, and was known in Colonial times as Cape Common. Surrounded on by the Laccadive Sea on three sides, Kanyakumari offers fantastic views, particularly at sunset. It’s also home to many religious monuments, like the Vivekananda rock memorial (pictured above) and the Kumari Amman temple.

The final stop on the Classic Run Rickshaw Challenge is Trivandrum, officially known as Thiruvananthapuram. This is the capital of glorious Kerala, known as “God’s own country”, the third state we will have visited. The city is blessed with a phenomenal location, between hills and ocean, and there are too many fantastic beaches to count. With its strategically useful position in the very south-west of the peninsula, Trivandrum has a long history and some great buildings to show for it: check out Kowdiar Palace (pictured above) and Padmanabhaswamy temple.