Alas, the Mumbai Xpress has ended, new friends were made, amazing places were visited and great parties held – we loved every second of it. But what happened during the last couple of days? Our Travel Scientist in the field, Princely recounted events as they occurred. 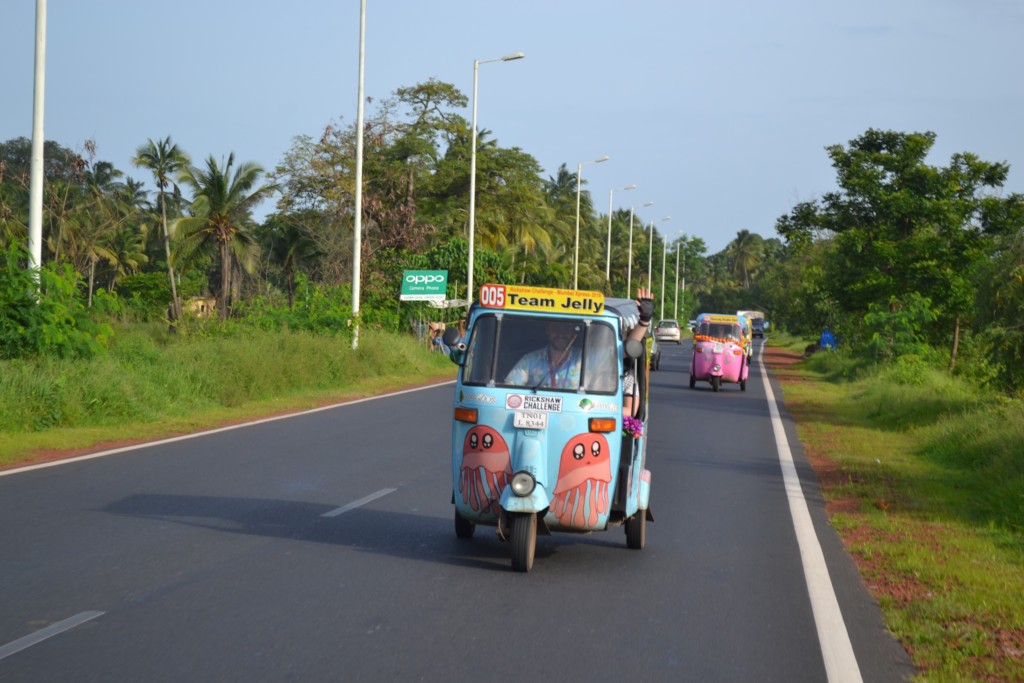 Day 9: Panaji to Murudeshwara
August 15 is the Indian Independence day. The Goa Round Table had arranged a school visit that morning, which was planned well in time and Teams 2, 3, 4, 5 & 6 took part in it. By the time we arrived the flag was hoisted in the premises and the kids were performing the skits prepared by them. The Teams enjoyed the show and distributed the presents brought down by them and the gifts from Round Table. We then got back on the road before 10 am.  When I crossed Karwar and was approaching Batkal I met Team 8, which had some technical snare with their vehicle. I checked the problematic vehicle: a suspected bottle lid drop in the fuel tank was detected and the Chennai Garage team swapped a fuel tank. Team 8 was very frustrated, so I called on the support team and we moved from the place. The problem was rectified that day and after that the team had no issues.
Throughout the route, two big groups formed out of the numerous teams. One group was the six teams from 001 to 006 and the second one consisted of three teams, from 007, 008 and 009. One part was totally under the control of support team and staffs, and the other group had their own plan, did their repairs by themselves and filmed all the hidden treasures of India.


I reached Murudeshwara at around 2.30 pm and the first team arrived there at 4.30 pm. Some of the teams visited the beach of Agoda which is suggested in our day plan. The big Shiva statue and the tower excited them all. They all mentioned the beautiful view of the base hotel. Then, we sat in for beers at Naveen residency and as usual, a lot of Indian non-logical stories were told.

Day 10: Murudeshwara to Mangalore
Driving in the state of Maharastra has made the participants experts in driving. They had gotten through some tough terrains, challenged by heavy rains and bad roads. On the bright side, this has made them all experts in handling any situation. The drive from Murudeshwara was an easy task for everyone – it was pretty much a good road.

Udupi was the stop in-between to complete a challenge, so most of the teams visited the place and some even tried the food served in the temple. The day ended rather quickly and the  next day drive was discussed well in advance during debriefing. Teams were aware that there was going to be a school visit the next day morning and a 250-odd km drive to Mysore.

Day 11: Mangalore to Mysore
The Mangalore school visit was reduced to 4 teams and rest of the teams wanted to leave early as the day was going to be one of the longest in the journey. Team 1, Team 2, Team 3 and Team 6 came for the visit. After the school visit, the teams were flagged off by the Round Table staff. On the drive, I saw Team 9 was attending a fault with a local mechanic and when I stopped the vehicle for them they showed thumbs up and they were fast to get back on road. Through Facebook, I learnt that Team 8 had some silencer issues and that they also took care of it themselves. The long day turned out to be an uneventful day and all the teams were well on time and enjoyed the view of Palace which is lit for the evenings.
Teams enjoyed the Opium bar in the base hotel and it was a rocking session for them.
Day 12: Mysore to Banglore
Mysore morning started with a school visit and we went there with all the teams.  Every one had a marvelous time with the children at school. Many Participants danced and asked the kids to repeat the movements. The kids did few performances and Team 2 and Team 6 danced to a salsa tune and the kids enjoyed the small gesture showed by our Participants.
Even though the distance of the route was not a concern, the day’s drive had a tough end to it: navigating in the Banglore traffic and finding the base hotel proved to be difficult. Eventually, all the teams made it in style, except for Team 3 which need some navigation and sign skills to get back to the hotel.
Team 2 participant, Hector Gabriel from Puerto Rico had his birthday, so he threw a party in the base hotel’s new pub. It must have been a wild party, because some of the team members could not even get up from bed the next day.

Day 13: Banglore to Vellore
In the morning, there was another school visit. As a resut of the previous night’s party, Team 1 and Team 6 skipped the school visit. Team 7 to 9 stayed in a different hotel and started early. They also informed me that they are would not be coming to the school. Finally, we landed at the school with 4 teams. The school had a terrific band and no participant will forget the warm welcome we got, teams didn’t want to leave the school premises!
Apart from the school visit, there were no calls for repair and to my knowledge, no breakdowns happened. It was a smooth drive to vellore. All teams wanted to go and rest early, as the previous days still had an impact on them. The teams had mixed feeling about the last day and most of them were sad that the fun rally is coming to end.

Day 14: Vellore to Chennai
The last and the final day started with a project visit and ended in a school visit.
As per plan, no team was left behind on the last stretch. The school and the atmosphere the students created gave a fitting farewell to the great Mumbai Xpress rickshaw rally. The last big party was held in the Elements Hostel in Chennai and the great rally had come to an end. 14 days and countless memories took the participants in strides and the effect will stay with them for some more days to come.
See you on the next adventure!