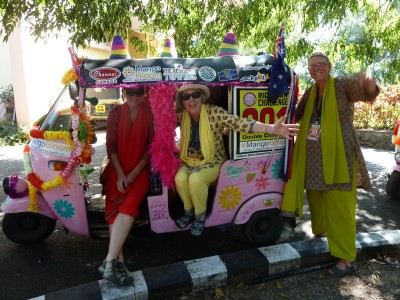 Classic Run 2012 team ‘double chinnai’ describing their great rickshaw adventure.
‘Here we are on the last day of our epic journey. It might have only been 8 days of driving, but it was a mighty effort by all in the Double Chinnais team. Janelle and Toni have shown they both have the potential for a bit of road rage. They were our principal drivers and managed to get us through the crowded city streets. Not only were they dodging cars, trucks, busses, bicycles, bullock carts, tractors, pedestrians but also cows, pigs dogs, goats and chickens. They did a collosal job of keeping us alive but also on time. Yep both are speed demons. And both can lay claim to threading an auto rickshaw through a needle eye gap between two busses. You need nerves of steel to drive on Indian roads and they have what it takes. All had turns at driving but they did the tough stuff.
All in all it’s been a really fun challenge and one we can talk about for years. A fantastic team of strong girls with adventure running in their veins. WE DID IT!