Nice piece from The Hindu on the Classic Run 2012 titled ‘Auto adventures’
‘There are a lot of ways to ‘discover’ India. As Dave Alefail, Tim Douros, Toni Csermelyi, and 30 other foreigners – including 11 women – from nine different countries found out, one of the best ways to get up close and personal with India, its people, and its culture, is to go the distance in an autorickshaw! These 33 ‘auto adventurers,’ as they called themselves, tooted into the city last Saturday, after completing the sixth annual ‘classic run’ of the ‘Rickshaw Challenge’ that saw them driving 15 decked up autos, all the way from Chennai to Poovar.
It was a fantastic experience, a great way to see the countryside and experience a different side of India,” says Tim, from Boston, Massachusetts, who is on his maiden trip to India. He, along with friends David Mantus and Tim Keutzer, also from Boston, travelled in a custom-made auto they named ‘Big Gulab Jamun’ (a tribute to David’s favourite dessert). “Tim Kuetzer and I have been to India before and have travelled in autos as passengers. But never had we even thought about driving one until we came upon the Rickshaw Challenge. Before we started out, all 33 of us had a three-hour intensive crash course on how to drive an auto, and practised driving one through the chaotic traffic of Chennai,” says David.’
Check full article below 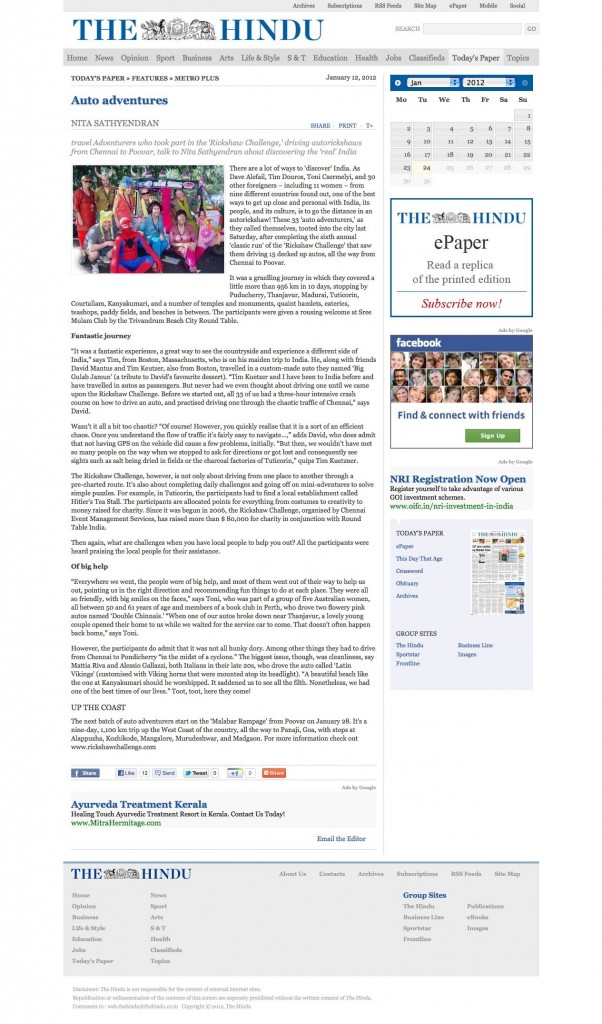