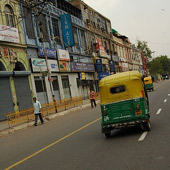 There’s no escaping the ubiquitous three wheeled auto rickshaw in India. Cheaper than a taxi and more convenient than a bus, their loud buzz can be heard all over the country.
However, your experience of India’s auto rickshaws doesn’t have to be restricted to merely riding in them. It’s possible to take the controls and actually race one! And lets face it, who hasn’t at one point in time, wanted to get into the drivers seat of an “auto”? Better still, you’ll be raising money for charity by doing so.
The Rickshaw Challenge operates four auto rickshaw races around India. The Mumbai XPress 2009 is about to get underway on July 31, 2009. However, this year there’s also the Tech Raid 2009 (which starts out from Chennai on October 16, 2009), and the Classic Run 2010 (which makes its way through Tamil Nadu, commencing on December 29, 2009). Next year, the Malabar Rampage through Tamil Nadu and Kerala will kick off on April 2, 2010.