On Malabar Rampage Day 3, teams had to make chai, seek out holy cows… and find fuel! 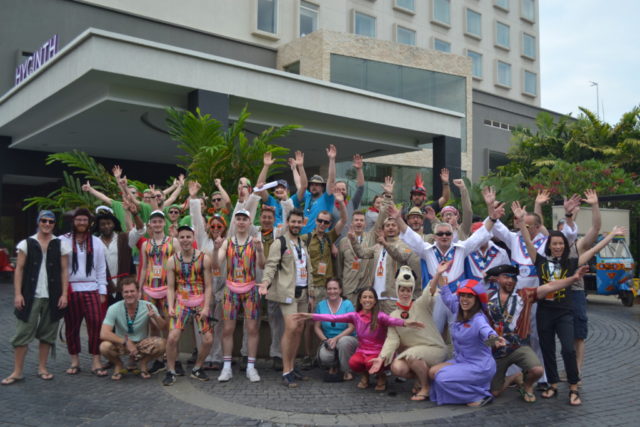 After a great first two days in Trivandrum, on Day 3 the Malabar Rampage Rickshaw Challenge hit the road. There were challenges to complete, not least travelling the 150 or so kilometers to Alappuzha. It was an eventful day, but everyone survived with many stories to tell. Here are just some of the highlights! 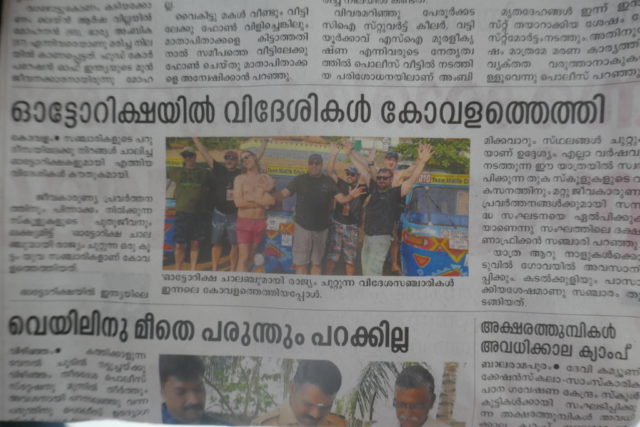 The event hadn’t even really got going, but we’d already made the paper. The Midlife Crisis lads made a trip to beautiful Kovalam Beach on Sunday, and somehow the local paper got wind of it. The participants came across very well, emphasizing the charitable aspect of the event, rather than the drinking; great job boys! 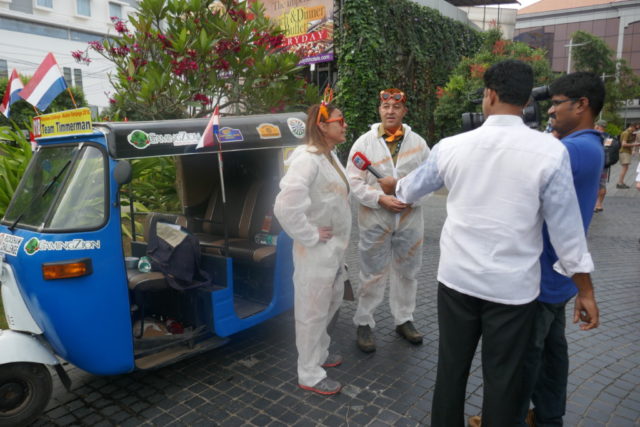 One sniff of fame wasn’t enough for us. Local TV turned up to our flag-off celebration, and interviewed many of the teams. Whether it was shown? Who knows. 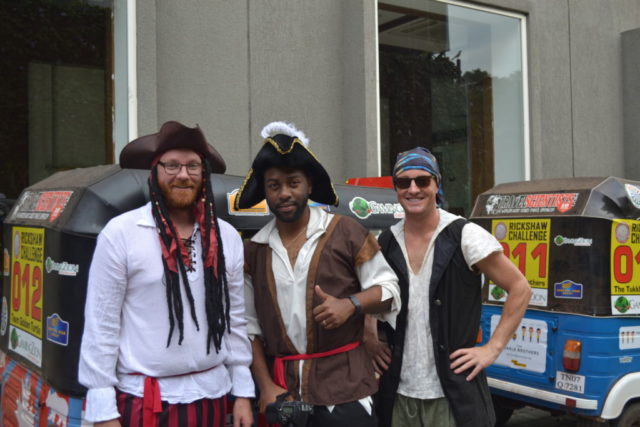 The first day on the road is when teams pull out all the stops on their finest costumes, and today was no different. Better yet, the teams don’t just look cool, but they are representing their roots. Team Golden Turtle dressed as pirates in honour of where they live, the Cayman islands, while the Outlaws, from Nottingham, are celebrating local hero Robin Hood. 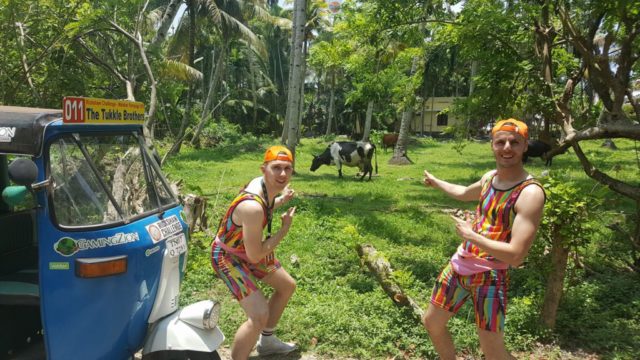 The first photo challenge of the day was to get a picture of team and rickshaw with a cow. Team Tukkle Brothers (and most others) managed with aplomb. 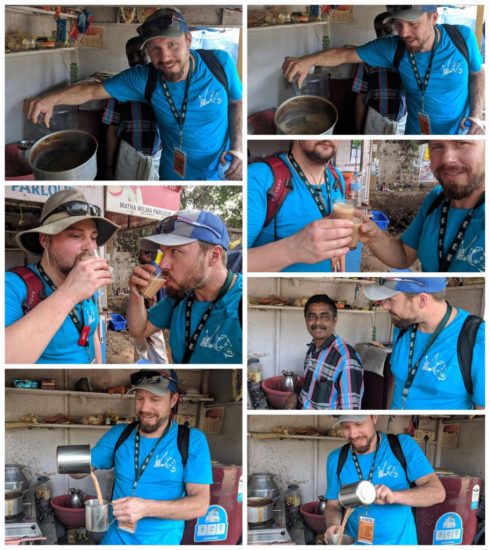 A tougher challenge was to get a photo of the team making (making, not drinking) chai. Everyone did amazingly well: above, Team 1 demonstrate the stages of the process. It’s hard to beat Team 3’s effort, though. Tracy and Ian were invited into a strangers home, fed breakfast, invited to visit their family in Chennai, and (weirdly) encouraged to hold their rooster. That’s what the Rickshaw Challenge is all about. 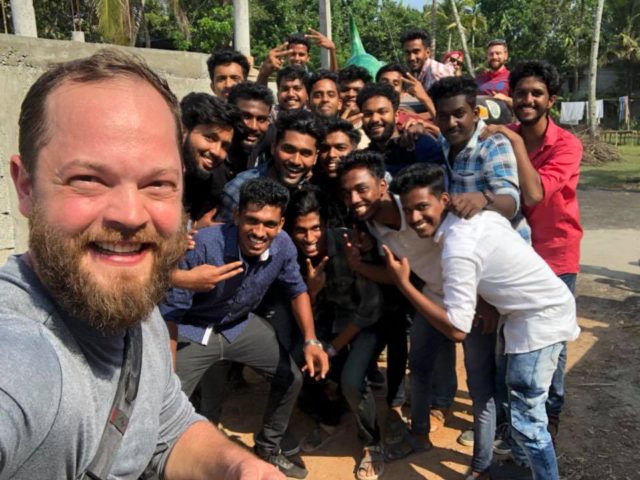 Selfies with strangers aren’t unusual on the Rickshaw Challenge, but this effort by Mitch of Team 2 has a great story behind it. Struggling to find a place to eat, their team somehow ended up blagging an invite to a housewarming party with forty college students, who taught Mitch and the gang to eat with their hands. Great times. 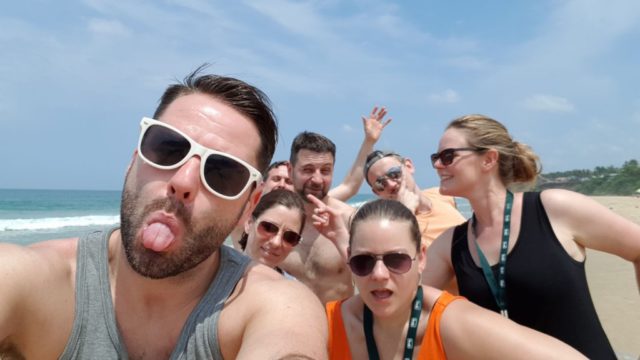 Our route passed one of Kerala’s best beaches, Varkala, famous for its red cliffs and golden sand. Many teams were eager to make the most of it, not least The Outlaws, pictured above. 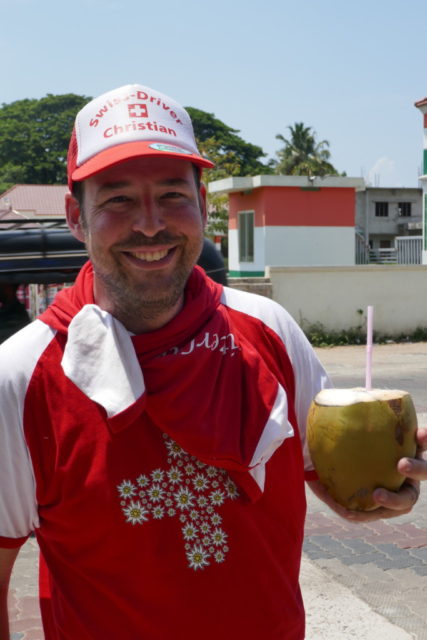 India is unpredictable. For example, on Day 3 it turned out that a major strike was occurring in Kerala, meaning the closure of restaurants, shops and (problematically) filling stations. After passing a succession of closed stations, the Outlaws were getting concerned. However, Swiss team Father and Son came to the rescue, and shared some their spare supply. Fate quickly repaid them for their kindness: a local gifted Karl a tin of delicious cashews, while Christian enjoyed his first ever coconut.

Lots of Water in a Dry Town 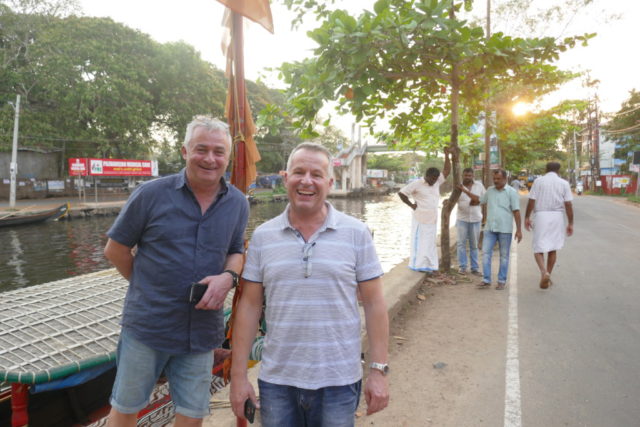 And then it was time for Alleppey (/Alappuzha). It’s famous for its backwaters, and teams were encouraged to check out its many canals, best seen by taking a trip on a boat. However, the one downside of the town is that it’s not the easiest place to find alcohol. Luckily, Princely was on hand to save the day: he persuaded our hotel to provide a secret stash of beer, available via room service. Day (or, rather, evening) saved.