Pongal Day is always a highlight of the Classic Run. 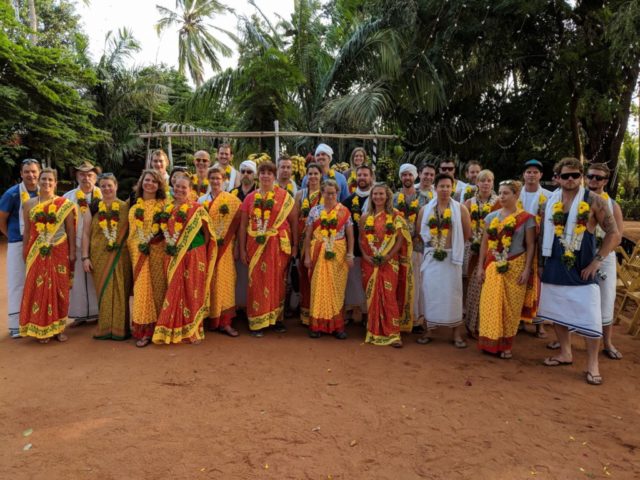 By Day 7, the Classic Run teams had trained, learned to cope with Indian roads, and had their fair share of adventures. Now it was time for something different: a test of how well they could cook (and look) in traditional local style. It’s an event you’ll only find on the Rickshaw Challenge, and we were sure the participants would love it. Here are our favourites photos from the day, with commentary from Princely. 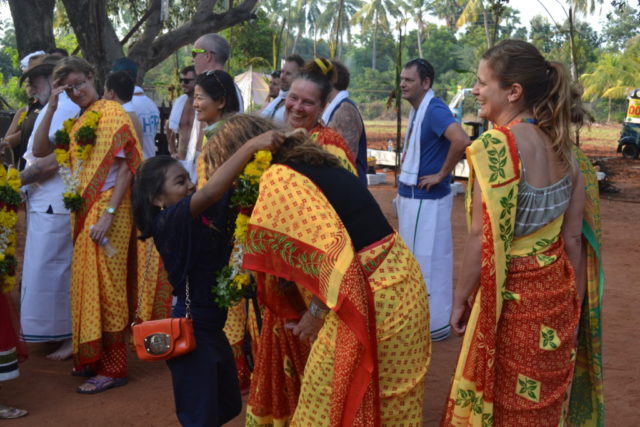 Day 7’s activity was kept as a surprise for the participants and only during the daily briefing were things revealed to them. We had planned a Pongal festival in Bremajothi farm at Sayarpuram and for the earlier part of the day we gave a small tour of close-by Tiruchandur and Manapad. As it had been a long day before, all the teams had a chance to relax. Some teams skipped Manapad tour and drove straight to farm, reaching there before 2 pm, about half an hour before the schedule. 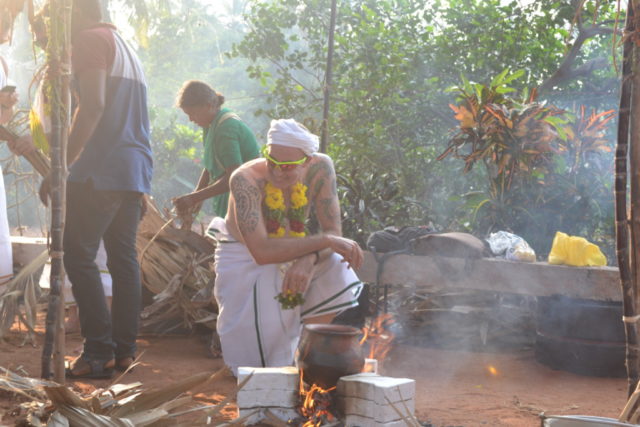 All the teams assembled at 2.30 pm at the farm and found the arrangements ready for them. The quiet and natural set-up of the farm did not fail to impress all the teams. Aravind and his wife Gayathri came down at 2:30 pm and by 3 pm all the teams were briefed about the activity. Aravind and Gayathri handed over the dhothi and sarees for the teams, while locals were on-hand to help everyone wear them properly! After they got ready we had a photo session and after that it was time for the competition. 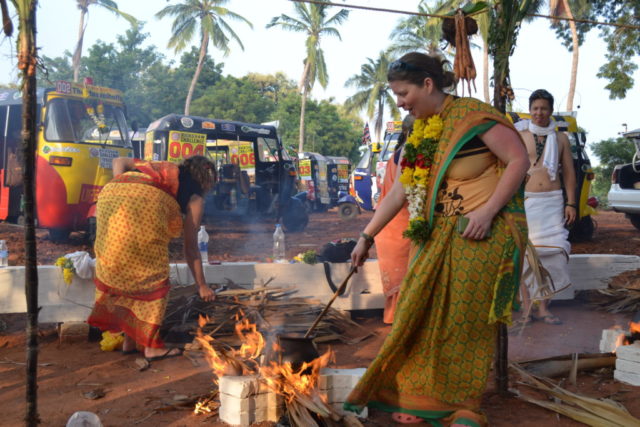 The Pongal event has always been a grand event and it attracts lot of media attention. Finally, after an hour and half the teams lined up for the Pongal competition results. The judging team (pictured above, in tense discussions) had to arrive after that and it took about 6.30 pm to have the results. Team 1, The Tuktators, won the competition for the taste, consistency and presentation.

After that the teams had their dinner given by Aravind and being dark we decided to drive them in convey to the hotel. It all ended up superbly and without a hitch we reached the hotel and the teams made it to the pub to finish their day. Knowing that the next day’s drive was pretty easy all the teams were in super relaxed mood that night. Those who burned the oil late into the night were Team 2 ‘the Hasselhoffs’, Team 4 ‘The Death-Shaw’, Team 6 ‘The Valkyrie of Valhalla’, Team 7 ‘Vibes Spice’ and Team 8 ‘Curry me to the Alter’ are the fantastic bunch. Known for their long night drink parties. they continued the habit in Thoothukudi as well.