Finally, the updates are in! Our wonderful bunch of participants have kicked off the Mumbai Xpress 2016 with high spirits… Here are the happenings of the first three days, as told by our field ninja, Princely. 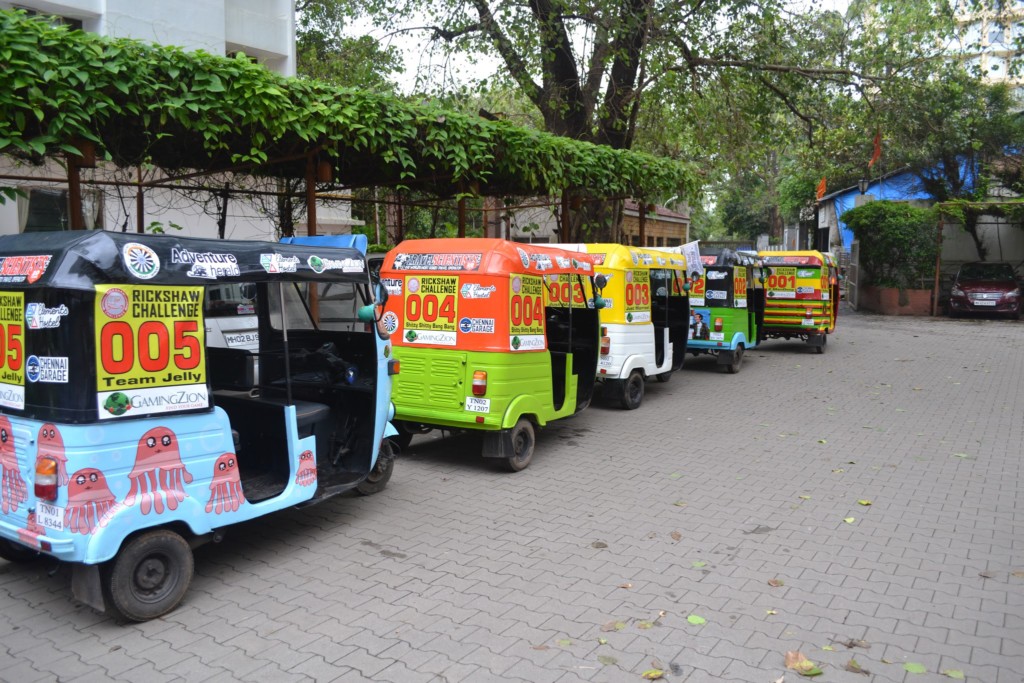 Mumbai Xpress is always an exciting, more adventurous and scenic rally in Rickshaw Challenge calendar. However, Mumbai bureaucracy and guardians of law are tough nuts to crack. From the preparation to assembling of the vehicles for the line up to practice, there were many difficulties, but all of them vanished from the organizers’ minds when they saw the enthusiastic participants. Registration started well on time and there were two teams, Team 4 and Team 6 that came on time. Rest of the teams came in slowly one by one. We had fixed the briefing at 11.30 am. Team 5, Team Jelly joined us after briefing due to their flight schedule.
The teams had 45 minutes of Briefing, which was done by Aravind, lead scientist of the Travel Scientists. The short  briefing came to an end and the teams had a Q&A session. The two rules which need to be followed in India are a) No logic and b) Smile on face. The teams were asked to join for the practice at 2 pm in the designated college ground.
Team 7, Beach Please is made up of three ladies from Estonia – they took a tuk tuk and went to a far off place which supposedly shares the same name as this college. Finally when they found the right place, the practice session has been going on for at least an hour. Few arguments with the tuk tuk taxi driver and finally some practice. Every team had completed about 3 hours of practice and then they were confident on the road.  After that, we met them in the hotel parking lot where they dropped their vehicles off one by one. All teams their first fuelling experience and all of them felt like celebrities as people were waving and cheering them all the way from the Practice Grounds to the Hotel.
The night ended up in a big initiation bash in Gringos bar, which is close to the base hotel Sun N sand.  It was a long night of fun and story exchange.


Day 2
The teams came out of the hotel at around 11.30 am. Team 4, Shitty Shitty Bang Bang where not confident to take up the challenge and they literally wanted to sign off. Aravind spoke to them and they took some lessons in the parking lot of the Sun n Sand Hotel. The rickshaw had some mechanical issues which were attended by our Chennai Garage crew. Further tuning of gears and throttle was done for their satisfaction and they went out with Aravind in the tuk tuk to take the real test. After an hour of driving, they felt much more comfortable and they decided to drive and accept the challenge.  The rest of the teams drove the vehicle to Malad (a Mumbai suburb) and took pictures of the team members, their rickshaw and a mall in the background. All of them submitted the picture to the organizers and some of them posted them on the Facebook hub of Mumbai Xpress 2016. Some of the teams were off to do some sightseeing in the evening. The short day came to a fast end after the Chennai Garage team set up everything for the next day flag off.

“Road road road” sounds like a classic Rock song to all the Mumbai xpress Participants in the 9 th morning.  The plan is to travel through the hectic traffic of Mumbai and reach a small costal town called Alibag. Aravind made briefing for the day and bid them all good bye.  The support crew started at 12 am and thus far there was no call. In the morning most the teams had costumes did according to their themes.


Then all had their music systems on, then many of them making merry dancing and pepped up the flag off with lot of pictures and fun.  What seemed like a normal day without many calls ended up with lot of losing way stories and couple of breakdowns which the teams managed themselves without support.  All the teams except team 3 reached the hotel before 6 pm. Then the night ended up with beers and food at the base hotel.
Are you crazy enough to come along for the ride? Then join us on the next Rickshaw Challenge. Get a team together and let’s see you at the starting line! If you want to join us in spirit, like us on Facebook or follow us on Twitter and Instagramto keep up with our latest antics.
0Shares
PrevNext