With the Indian Autorickshaw Challenge, Aravind Bremanandam has built a brand around the humble tuk tuk. 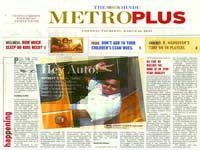 Pitted roads. Desert sands. Hilly terrain. Hairpin bends. The Budapest to Bamako rally (also called ‘The Great African Run’) tests driving skills. For most participants, this annual trans-Saharan rally is an addiction. But no amount of e xperience seems to equip them for the chaotic traffic encountered in and around Morocco. Most of the drivers don’t leave this leg of the rally without their cars getting scratched or dented.

In the 2006 edition, an Indian stood out for the ease with which he handled the traffic. Humungous vehicles had packed the road and the rally cars could move only by the inch. Unfazed, Aravind Bremanandam (in a 1974 Soviet Lada) wove through the traffic, taking advantage of every small opening.

In the evening, Aravind was the subject of great curiosity. Into a software business that required him to alternate between Budapest and Chennai, Aravind sang the praises of our autorickshaw drivers. “This traffic is nothing compared to what you find in Chennai,” he boasted to the group that hung on to his words.
He promised to give them a feel of driving autorickshaws through the Indian countryside. He kept his word. Later in the year, the “Indian Autorickshaw Challenge”, a Chennai to Kanyakumari rally, was organised.
With painted designs and accessories, the autorickshaws were given a dash of flamboyance (Now, the teams can smarten up their autos by shopping at www.pimpmyshaw.com). The participants themselves went through makeovers. Dressed like dukes, princesses, wizards and what not, they played many roles. The rally lived up to its tagline — “An amazing race for the clinically insane.”
Full article here