Leaving the official flag down from the Hotel Taj Manjarun on a bright sunny morning, spirits at an all time high, the rickshshaws began their over 150 kilometer journey.

The first stop and challenge location was the legendary Shri Krishna temple in Udupi . A large winding structure situation in an old town complex, this was one of the most memorable temple visits, with diamond encrusted golden gods, air conditioning through certain hallways, loudspeakers broadcasting pious chanting and an unforgettable hall looking out over a vast square water complex where 23,000 people are fed on a daily basis. For those lucky enough to wander the whole grounds, a temple elephant was taking 10 rupee coins in exchange for soft smacks on the head by the elephants truck, a blessing all will remember.

After the temple visit roads were a mixed tropical experience with dry patches alternating with washed out roads and mixed showers. Teams that broke down sporadically hid under palm trees; or took refuge in roadside hotels, deciding to try the menu as well. Lunch with locals is always an experiment with local dishes and moreover the distinct experience of trying to order from Indian waiters.

One of the greatest moments of the CEAT Mumbai Xpress 2008 will undoubtedly be the moment when Madrid 2016 stopped at the point where other teams, such as the British team The Engine spontaneously burst into shouts of joy: the appearance of the Arabian Sea. After stopping, the Spanish team noticed a local holding what looks like a small plastic tortilla holder. Inside –a King Cobra. Hypnotized by his handler, other teams began to stop to offer assistance, assuming that they had broken down. Upon seeing a real live snake charmer and the incredible spectacle of a King Cobra the magic of the experience left everyone speechless. 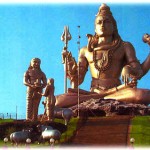 Finally turning into the road leading to the RNS Residency,Murudeshwar, the flag down location for the evening, teams got a glimpse of the incredible silver and golden statues and temples, dominated by an enormous seated Shiva atop a museum. Once an island accessible only during low tide; the island with its hotels, statues and shops is a little less than 10 years old, prompting varied responses from awe to comparisons to Disneyland.

Epic views from the hotel, with local fishing boats making their way out despite the storms took second seat when teams started getting hungry and agreed to roam through the strip of restaurants to find one serving meat and alcohol –a service difficult to find in the stigma of a vegetarian and abstinent Hindu village. Eventually, wading through the dark amid intermittent drenching rain, almost everyone reached a hidden restaurant that required nothing less than a dark alley and being turned away from three moral vegetarian restaurants.