Time for a short history lesson! Broaden your view of this mini-automotive wonder and appreciate just how far it has come.

The earliest notes of rickshaw-like vehicles come from 17th century France, under the reign of King Louis XIV, when mobile chairs appeared. Naturally, these “thrones” were pulled by unfortunate servants – just imagine pulling all that weight through a city!
Thankfully, later on, the design of the cycle-rickshaw came into being thanks to Jonathan Gable, an American missionary living in Japan. His wife was ill and too weak to walk from point A to B in the city, so he created a cart that could be pulled by cycling and was comfy for his wife to travel in. He named his clever invention “Jinrikisha,” which translates to “man-powered vehicle” in Japanese. This happened in Yokohama in the 1800s, and fans of the Rickshaw have been reaping the advantages of this creation ever since.

The “Jinrikisha” quickly caught on, and over the next decade, 150,000 of them flocked the streets of Tokyo and other Japanese cities. Soon, the vehicles spread to Burma https://rickshawart.org/history-of-the-rickshaw/ (now Bangladesh,) and Singapore and China. The first couple of rickshaws appeared in India thanks to Chinese immigrants around 1940, and since then, their usage has skyrocketed. According to The Hindu, the modern auto rickshaws are so popular that they take 299 million trips with passengers in India per day. They represent movement, creativity and diversity, come in different sizes, shapes and colors – and that’s why we love to race with them! 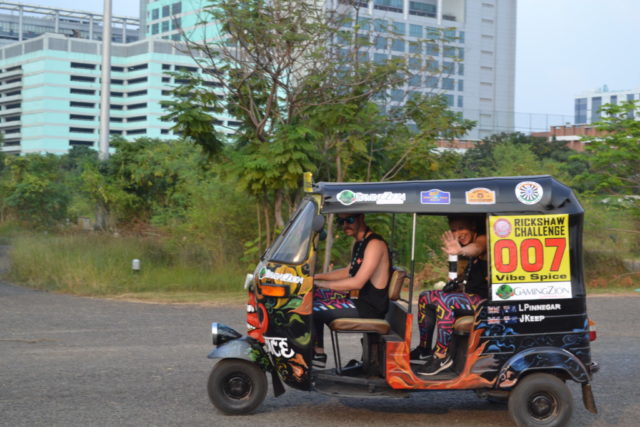 Are you crazy enough to come along for the ride? Then join us on the next Rickshaw Challenge. Get a team together and let’s see you at the starting line! If you want to join us in spirit, like us on Facebook or follow us on Twitter to keep up with our latest antics.
0Shares
PrevNext