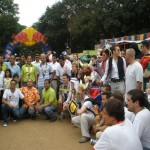 The Flag off ceremony held in St. George’s Indo-English school and orphanage, a 300 year old series of buildings, set the stage with colorful tents, a RedBull arch, jugglers and speeches.

Participants placed the final decorative touches on outrageously designed autorickshaws, from the Disco bottle hanging from Compact Pussycat’s rickshaw, to the bell pull used as a tail and male blow-up doll to complete team Nip ‘N’ Tuk’s autorickshaw that had been transformed into a pink elephant. Participants got their first taste of the local media crews that follow the event, posing in costumes that ranged from pirates, to superheroes and hippies.

Right out of the gate, teams began breaking down, in fact Tip ‘N’ Tuk created a new event record by having a massive breakdown less than 100 meters from the flag off! The first days are famous for having the most mechanical problems as foreign drivers learn the subtle nuances of driving a two-stroke, 3 wheeled bottom of the barrel autorickshaw. Team 6, The Jokes of Hap-Hazzard had the dubious distinction of having their rear wheel fall off and roll past them as they came to a stop. 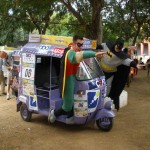 table ( MERT- 30) . Since this happened on a Sunday, there were only about 60 children, rather than the hundreds we would see in the coming days. There we were greeted by teachers and students with fragrant jasmine garlands, small milk candies and a blessing for a good journey. Participants dressed in costumes thrilled the kids and there was just enough time for a brief game of ball. Teams and organizers then met with local Round Tablers and teachers who gave a history of the school, the impressive achievements of the humble staff -notably that despite all the difficulties not a single student has failed the yearly examinations. Participants distributed chocolates and began the rest of journey to Vellore.