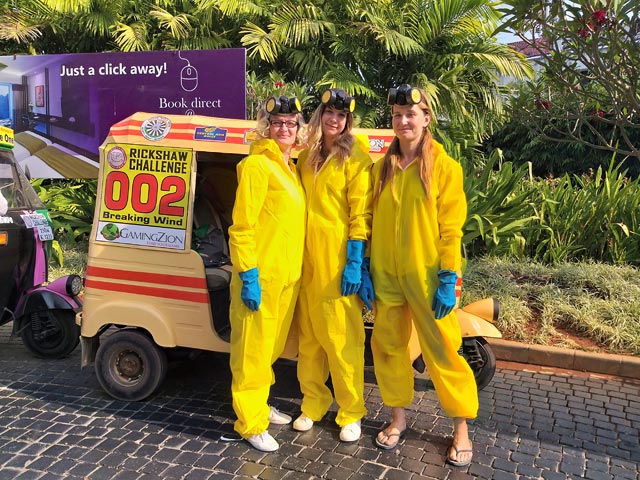 Why did you decide to sign up for the Rickshaw Challenge Malabar Rampage 2019?

A friend who had been living in Goa mentioned it and it sounded a suitably ridiculous way to introduce myself to India. I’ve always wanted to do a rally and had been thinking of signing up to do The Adventurist’s ‘Mongol Rally’; after doing this however, those grandiose plans are on hold as it isn’t called a Challenge for no reason!

I expected the tuk tuk to be like driving a motorbike and to have plenty of time to meander around the roads enjoying the countryside and the people. Clearly, my rational and irrational mind need to have a chat because the reality was a cantankerous tin can that did not want to get into gear, needed biceps of steel to crank the engine into life and my team mates and I must have been pretty slow and faffy because we never felt we had time to meander and enjoy the countryside; every day was a race to make flag down with some hurried stop offs on the way to at least try and take part in the challenges. I still don’t know why we were so slow! 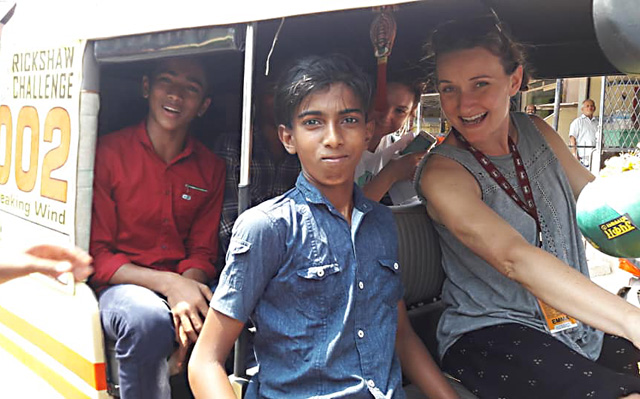 What was your scariest experience on the road?

Getting caught in the late afternoon rain that led into a storm that led into lightning hitting a tree that fell and blocked the road. This meant one very long traffic jam that meant we were late for flag down and had to drive in the dark with one insipid front light, one tiny little windscreen wiper that tried its best to give a clear view but without street lamps, it was frightening to drive along still with people running across the road dressed in dark clothing, cows still ambling about and the buses that still careered along with no concept of others being on the road too.

What was your most positive experience during the Malabar Rampage?

The people. We had a spectacular first day breakdown that meant standing around in the dark in some back alley (thank you google GPS for that helpful detour). The residents were initially bemused by our arrival, dressed as we were in our ‘Breaking Bad’ yellow jumpsuits but they soon came out with tool kits, phones and offers for us to sit inside their houses with a fan, have a drink and meet their families. Coming from London where even making eye contact on the tube is a faux pas, this was a refreshing change and a lovely one too.

How many breakdowns did you have and what did you learn about fixing a rickshaw?

I think our tuk tuk was broken from day one (and I’m not just saying that to excuse our bad driving) but the clutch was incredibly difficult to use on the first day and we broke down countless times – usually in the middle of a busy junction. Eventually it was a local man who came to our rescue and pointed out our clutch needed fixing. The mechanics from the Rickshaw Challenge were called out and they fixed it and all was well until we came across a festival in Alleppey which meant GPS took us on a weird and wonderful back alley detour that involved paths of sand – which the engine took a dislike to and then conked out. I learned absolutely nothing about fixing a rickshaw except it would appear you can take the odd screw from random parts of it in order to fix certain things…like the clutch. When it comes to the engine having a hissy fit – game over. It’s time to call for help! 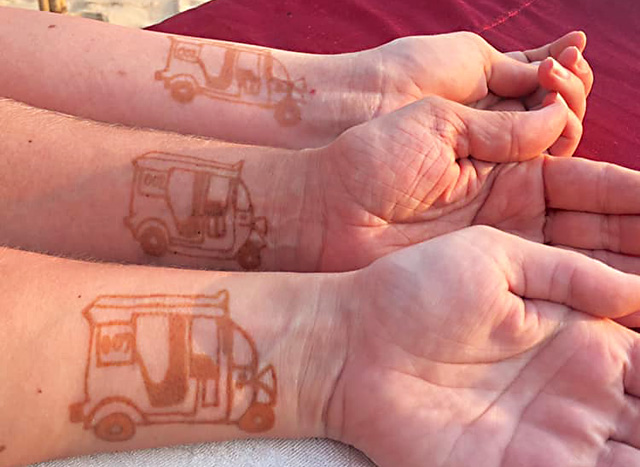 Describe India in one word or sentence, which doesn’t include coconut or coconut tree!

Sensory. All five senses enjoy India – whether it is smelling spices in the air (or petrol), seeing the colourful silks and beautiful landscapes, touching the food on your plate (no cutlery in many places), hearing the strains of that glorified lawnmower you’re driving and tasting what is essentially an Indian takeaway twice a day every day.

What is your most “only in India” experience?

We captured a wonderful moment whereby we were coasting along NH66 with the sounds of Kylie and Jason warbling ‘Especially for You’ when we came across a cow walking up ahead. Now, I don’t know whether it was the love song playing at the time or delirium from spending so many hours cooped up in that sweatbox but we all thought the back end of the cow had a certain sensual swagger about it which seemed fitting with the song. Maybe you had to be there. Maybe we should have drunk more water that day.

Do you have any recommendations, any good advice for future participants?

Pack lots of those horrible ‘traveller trousers’ (you know the type all the Gap Yar students wear) and cotton tops. You will SWEAT and then SWEAT SOME MORE. Also, pack gloves as those sweaty hands of yours will struggle to grip the handlebars, patience (maybe xanax?) and ensure you take along team mates whom you love greatly, can be honest with and with whom there are no cracks in your relationship. This is an incredible experience – you will learn a lot about yourself and others, see and do wonderful things but it is challenging (or maybe that was just us) and if you are tired and can’t get the tuk tuk to start on a hill, you need people around you who will stay calm and be supportive – not scream at the gods for giving you the foolish idea that this was a good way to spend a week. Because I didn’t do that. No siree.