We had a great first day on the Classic Run.

For those of us at Rickshaw Challenge HQ, Christmas and New Year is one of our favourite times of the year… and not just because of crackers and mulled wine. 28th Decembers marks the start of the Classic Run Rickshaw Challenge, starting off in Chennai and then exploring the heart of Southern India. Here is our recap of Day 1, from organiser extraordinaire, Princely Jeyachandran.

In the Rickshaw Challenge calendar the all-new 2018 started on 28th December 2017. Before we move on to the events, I would like to share a few interesting facts as to why the Classic Run is special. In 2006 when the founder of the Rickshaw challenge conceived the idea of taking his friends to an event like this, his primary focus was party for 10 days. So the basic element of this rickshaw challenge is built on is fun and party. However, driving on Indian roads is not a party. It’s very stressful especially if you are from the developed nations of Europe and America. Having said that, after 12 years Rickshaw challenge remains one of the most well organized trips in India. The evidence is the happy participants!

This particular event is also most special because we get to visit Tuticorin, the birthplace of Aravind Bremanadam founder of Rickshaw Challenge. His extended family gives the special treatment to all the participants of Classic Run, the element we will be missing in all the other rallies in the calendar. This year we had a slight dip in the overall participants, as we have only 15 teams compared to 20 last year. Even though there is no specific reason for this, the smaller number will give us good opportunity to take care of the participants more personally. 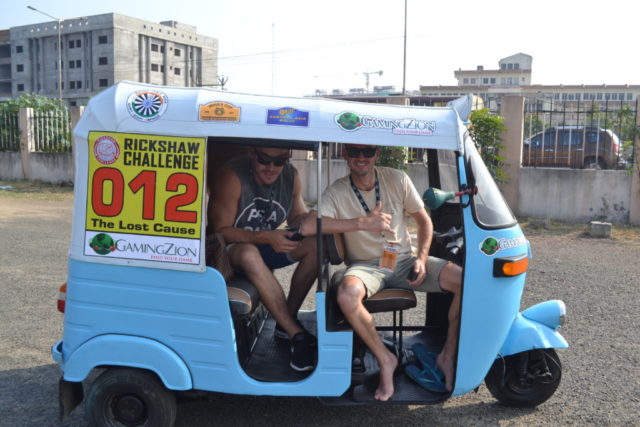 On the first day, the registration table is laid at the base hotel at 8am and the teams started registration at  am. Within no time, all the teams fell in place and registration was over before 10.30 am. The lone contender Pushkar Mitra of Team 13 Mitra firm, who participated in the Tamilnadu Run 2017, did not turn up and he planned for the start day on 29th from Chennai. The rest of the teams had briefing at 11am and it was done by Aravind himself. Once the briefing was over the teams headed to the practice ground and as usual we had our training session for 3 hours and all the teams were confident enough to take the Indian road.

The first drive on Indian roads from practice ground to Base hotel was successful for everyone, but there was some drama as Team 15 were a little late to the hotel. They had got a little lost, but they managed to navigate their way back eventually. All had gone well on the day and everyone had a great time at the welcome party at Elements Hostel. All teams had left on time responsibly as they were sensibly focused on being ready to face the next day, where they would hit the road for real!